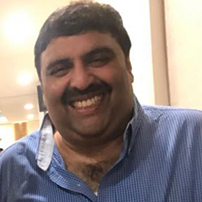 Mr.Arvind Kumar Sankar is an industrialist and a builder and promoter who has established his construction company “Aravind constructions “,in Madurai,27 years back which was one of the first to build apartments in the temple town. Being the son of S.B.Sankar an entrepreneur who spearheaded steel making in Tamilnadu since 1960s with his flagship company of his conglomerate- Trichy steel rolling mills that had equity participation of leading business houses like the TVS in his ventures,Arvind had the path well laid to establish his own industry. Apart from being a builder and promoter that is an inborn quality he has philanthropy,art and culture running in his blood. He became the founder president of Chinmaya Yuva Kendra in madurai being hand picked for the position by Swami Chinmayananda himself. At the age of 10 , Swami Dayananda initiated Arvind to in-still values to the underprivileged children. And so he founded “Ujwala” that taught morals and values to children of broken families .
He has been majorly responsible in forming the Madurai chapter of the Indian national trust of art and cultural heritage .
INTACH . His passion towards art and culture helped him take the chapter to great heights and be nationally acclaimed.
Arvind inherits and successfully runs Lalitha charities,Meera charities where a lot is done towards education .
Arvinds passion to share his knowledge further led to the formation of LAMPS trust(Lalitha Arts and Music Promotion Social trust) where he documented and revived various art forms.
Also the president of world crafts council had praised Arvind for authoring his book “Pullikolam and the creative mind “, where he narrates the technique of drawing this age old Tamil art.
Arvind is good at various other co curricular activities such as painting and carpentry.He plays the Veena , Violin and flute and knows the nuances of Barathnatyam and the techniques of Carnatic vocal singing having learnt from eminent gurus like Neyveli Santhana Gopalan,Shri Lakshmi Narayanan, shri Sankarasiva Bhoopathy and MS.Subbulakshmis cousin Smt Meenakshi Ramasubramaniam. Arvind has been interviewed and featured in many prominent publications such as BBC ,The Hindu ,times of India etc.