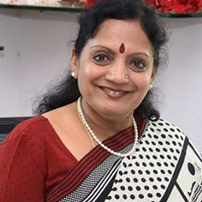 Mrs. Aruna M Visvessvar with an M.Sc (Hons) Chemistry, M.B.A Finance, M.A Sanskrit and B.Ed is a well-known and highly respected educationist in Madurai.
She moved to Madurai in 1977 after her marriage to industrialist Mr. Visesh Aiyer.
She then started her professional life first as a co-director in her husband’s company and then as an entrepreneur, involving herself in trading, manufacturing and distribution activities of industrial and agricultural equipments and spice powders. Simultaneously she started her foray into education¬ first as a part-time teacher of Sanskrit in a private school, later on becoming Principal of the same school.
Aruna has been a topper and gold medallist in all her academic pursuits. She was presented an HMT wrist-watch by former prime-minister Mrs. Indira Gandhi in an all India quiz competition. Aruna a certified International Trainer on Life Skills is also professionally qualified in Astrology, Numerology, Vastu Shastra and Feng Shui.
Has also been the champion athlete of her school and college for nearly 5 years. While in school she captained the under-19 girls Hockey Team of Delhi which won the Chahal Junior Women’s Hockey Tournament.
Aruna is a good singer and dancer, having learnt Kathak as a child. She has won state awards for mono-acting and debating as well.
From 1996 to 2001 Aruna worked in Bangkok as Vice-President of an Insurance Company managing HR and Office -administration activities of the head office and 117 branches. Again from 2001 to 2003 she was posted in New York as Business Manager of the IT company started by the same Insurance Company.
It was in the year 2009 that Aruna started her own school, Adhyapana School under the CBSE Board.
Adhyapana School is now a highly reputed school with nearly 2000 students, year after year securing district topper positions as also several National and Inter-national awards. The excellence is not only in academics but also in music, drawing & painting, yoga and such more .
Aruna herself is the recipient of the National Kamal Patra Award, Best Principal Award, Woman Entrepreneur Award, Global Woman Award etc. She is comfortable in English, Hindi, Tamil, Malayalam, Sanskrit and the Thai language of Thailand.
Aruna and her husband are blessed with 2 children a married daughter settled in NY and a son, married and settled in Singapore and 4 grandsons!