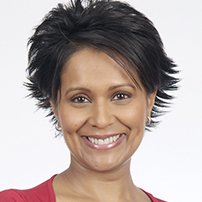 Arti Halai is a television presenter, reporter and producer with more than fifteen years experience in the media industry. She has worked with some of the UK’s largest organisations like the BBC, ITV, ITN News Channel, Carlton, LWT and Mirror Group. She is a consultant, advisor and trainer on presentation, media and communication skills, working both in the UK and abroad. Arti has set up a number of successful businesses under the Fleet Street Group including a PR agency, creative design agency, consultancy and training business. Fleet Street Group offers services that help businesses grow through the power of communications. The group works across a variety of sectors including hospitality and leisure, B2B, professional services, retail, charities, education, media, food and drinks and financial services. Arti was the face of ITV1’s regional news in the Midlands, Central News for seven years, fronting the bulletins from breakfast through to lunch. During her media career she covered everything from the historical significance and the role of the Commission for Racial Equality (CRE) to a critical review of the European Parliament, the death of Diana, Princess of Wales and 911, the rise of India and Pakistan as nuclear powers, the regeneration of the South Bank, previews of the Tate Modern and the London Eye and interviews with the late Sir Richard Attenborough and Salman Rushdie. Arti is often approached to present at live events, from award ceremonies and annual dinners to fundraising events. Arti also chairs panels at conferences and business breakfast seminars as well as doing live entertainment events. As a guest speaker, Arti delivers talks on personal effectiveness and raising profile by creating a positive mindset and strong, succinct messages that empower and lead others to achieve results. Arti is a Practitioner of Neuro Linguistic Programming (INLPTA trained), has an ILM Level 5 Coaching and Mentoring Certificate (Institute of Leadership and Management) and is a Certified Emotional Intelligence Practitioner (Six Seconds Organisation). She has a BA (hons) Social Policy from the University of Sussex. Arti’s first book, ‘Positivity’ was published by The HotHive in 2009. Among clients that Fleet Street Training has worked with are: Virgin Trains, Twentieth Century Fox, Lloyds TSB , Institute of Directors, Aljazeera, Aston Villa Football Club, Royal Life Saving Society, DLA Piper UK LLP, Shop Direct Group, Grant Thornton, Vistage International, The Midcounties Co-operative,