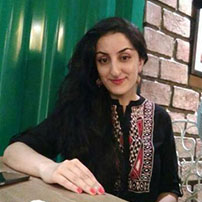 She was a research development Intern at the National Human Rights Commission of India working on the project ” Women Rights – A Comparative Study of India and Armenia, she was the President of Students Welfare Association of International Students House for Women of Delhi University.

She volunteered four years for the Armenian Young Lawyers Association, by providing free legal aid to the citizens of Armenia, traveling to remote villages, close to borders and organizing Human Rights awareness training at the educational establishments and for the residents in those areas.

She worked as an International Relations Specialist at National Centre for Professional Education Quality Assurance of Republic of Armenia, she worked as Project Coordinator of Armenia at PICASA Tempus project in partnership with Italy, Georgia, UK, Ukraine, she worked as Legal Observer at International Visarga Fund’s project on “Integration of European Values of the Anti-Corruption Sphere for Armenia: Practice of Visarga Group Countries,” as Legal Observer at the OSCE Yerevan Office project on “Multi-Component Monitoring in the Notaries Offices of the Republic of Armenia.” Anush was one of the first members at the Public Council of the Republic of Armenia in the committee of State and Legal Affairs.

Currently she is doing a comparative research between India and Armenia on the rights of working women. She is delivering speeches and writing articles.

Born and raised in the family of Painting Artist(father) and a Doctor(mother) she learned both walking on the ground but not forgetting to look at the stars in the sky. The biggest challenges in her life which made her stronger were death of her father and the survival of her mother from the last stages of cancer. Her parents love and unity are her inspiration. Anush believes on attaining peace and harmonization through respecting and loving world cultures and religions.