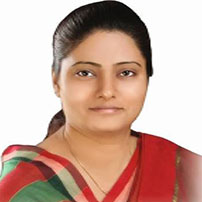 Union Minister of State of Health and Family Welfare, Govt. of India

Anupriya Patel is an Indian politician, based in the state of Uttar Pradesh. She is currently the Minister of State in the Ministry of Health and Family Welfare, Government of India.

She was elected to the Lok Sabha, the lower house of the Parliament of India from the constituency of Mirzapur in the 2014 Indian general election. She was previously elected as a Member of the Legislative Assembly for the Rohaniya constituency of the Legislature of Uttar Pradesh in Varanasi, where she had fought a campaign in alliance with the Peace Party of India and Bundelkhand Congress in the Uttar Pradesh legislative assembly election, 2012.