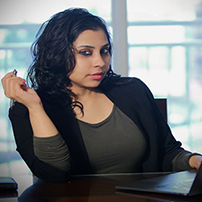 She had into Digital Therapy technology and Cognitive Behavioural Treatments. She run an organisational called Rays 3D at Katrikadavu. We did Autism app for Kerala Govt and Drug rehabilitation app for UAE govt. She got state award from past Kerala Cm in 2015 and have also won the highest technology award in the world on 14 DEC 2018.Anubha Sinha, a charming young woman who enables an extreme level of entertainment through visual effects. A flair for innovation runs in her blood, Anubha’s father Uday Sinha was also a genius who manufactured a industrial liquid filling machine that worked without electricity. For this Mumbai based techy-entrepreneur programming is more of a passion than profession that she started at the age of 13. She holds a Guinness World Record for producing the biggest 3D hoarding and is now one among the key players in 3D printing.Anubha Sinha’s Rays 3D technologies has converted 26 full length movies and 82 part shots of feature films into 3D apart from holding a Guinness World Record. Her latest addition to her bouquet is Rays 3D Technologies’ innovating product, a 3D mobile screen guard. She has trained 2000 people in 3D technology for which she received an award from Oommen Chandy in 2015.