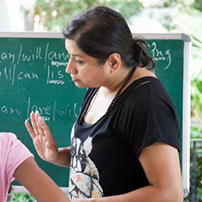 Anubha Sharma, a financial services professional with a flourishing career spanning over two decades, is the co-founder of Mumbai based NGO Angel Xpress Foundation. An alumnus of Lady Brabourne College, Kolkata, Anubha has held regional and national roles at various organizations such as Kotak, Religare, Reliance Capital & Edelweiss.

In 2012, while on a year-long sabbatical, Anubha started volunteering at a street school for slum children. Interactions with the children made her realizethat the education system serving the poor did not deliver, thus ensuring that most of them would remain locked in the endless cycle of poverty, generation after generation.

When a Facebook post asking for warm clothes for these children resulted in over 3000 people calling to offer all kinds of help, realization dawned that a bridge needed to be created between these socially conscious citizens and the children who needed their support to make something of themselves.

Thus, together with one of the callers, a preschool owner called Beenaa Advani, who expressed a desire to work with her, Anubha embarked on a social experiment to empower underprivileged communities through education and interactions, by collaborating with educated, socially conscious and affluent communities. What started with 18 children in 2012 has grown to a social movement involving 500 volunteers and 1900 children.

After becoming involved with Anubha, Beenaa Advani also decided to quit her commercial work and as co-founder of Angel Xpress has been a valuable contributor to the cause over the years.

Deeply inspired by many people who have gone beyond themselves to care for society as a whole including Mrs. Sudha Murthy, Anubha firmly believes that money serves a need but life is lived meaningfully when we give back. The AXF journey has been replete with challenges of myriad types and proportions, but a strong conviction in the impact of the work keeps Anubha going.

Anubha’s plans for Angel Xpress Foundation is to enable 2000 committed volunteers and through them ensure that 10,000 children a year benefit from the AXF Free Learning Center Program. This year the program has been expanded to include a youth mentoring segment that provides academic, vocational and career guidance and training to its graduating students, this has added the crucial missing piece in the creation of sustainable employment opportunities for underprivileged children and their families to help them rise from poverty into a life of dignity. After all, dignity of life is a fundamental human right.