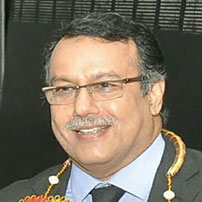 Consul of Spain & Head of Mission in Chennai

Mr Antony Lobo is the Consul of Spain and Head of Mission in Chennai.
Born into a family of Diplomats, his father and Grandfather were former Consuls of Spain in Chennai and from the year 1951.
Consul Antony lobo will be working to achieve closer cooperation and relations between India and Spain, encouraging and fostering stronger educational, economic, cultural, touristic, humanitarian and bilateral trade relations between both countries.
Mr Lobo is a Mechanical Engineer from The College of Engineering, Guindy, Chennai and former Director-International Operations of the 4 Billion Dollar Ashok Leyland Ltd. He is also an Alumnus from the Indian Institute of Management, Ahmedabad, (IIM).
Consul Lobo also serves as the Managing Director of AMLO Advisory Pvt Ltd. an International Advisory firm offering advisory services in International Trade on Imports and Exports to large Corporates and Global clients.
While at Ashok Leyland as Director – International operations , he was the recipient of the Gold Trophy from EEPC (Engineering Export Promotion Council) as a Top Exporter from the South for three consecutive years – from 2009 thru 2012.
He has travelled extensively in India and abroad and has visited over 75 countries in Europe, Africa, Latin America, Russia and South East Asia and has wide experience in International business and trade. Was an active member of CII and was part of the delegation that accompanied The President of India to Mauritius, the Prime Minister to Ethiopia, The Minister of External affairs to South America and other delegations of CII to Bangla Desh, Srilanka and South Africa with the objective of increasing Bilateral trade between these countries and India.
Consul Lobo is an active Rotarian and is a long standing member of the Rotary Club of Madras and also a Paul Harris fellow of Rotary International.