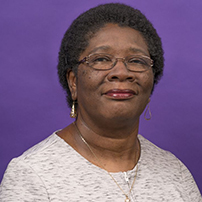 Anndeloris Chacon is a visionary leader whose passion and purpose are to help others. Voluntary work in the hospital included Bullying and Harassment Advisor, union representative for Royal College of Nurses, member of Black and Minority Ethnic core group and mentor/preceptor for staff.
In October 2015, Anndeloris made a change of career and is now the manager of the charity Bristol Black Carers. Other involvement in the community includes as a Trustee with Bristol Black Carers, school governor, facilitator for youth group at church, board member for Studio 7, Phoenix Social Enterprise and many others.
In 2017 Anndeloris published her first book of poetry called ‘Listen’. She found it an immensely enjoyable experience. The feedback has been very positive, and some have said that it is inspirational. Anndeloris believes this is the beginning of many more books to come.
Anndeloris is enjoying the work of the charity because it gives her the joyous satisfaction of helping a person in the ways they have identified.
She is looking forward to the future because there is so much more to build with and in the communities.