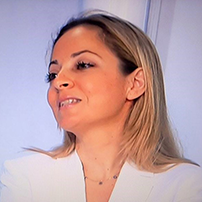 Anna Koukkides-Procopiou is an outspoken activist and prominent member of civil society. She has until very recently been at the forefront of the presidential campaign in Cyprus, having served as the spokeswoman of one of the leading candidates. A member of the Advisory Board of the Center of European and International Affairs, University of Nicosia and until recently a Researcher with SeeD-Centre for Sustainable Peace and Democratic Development, her academic work mainly focusses on gender and inclusive security (especially in the context of the Cyprus Problem), foreign policy and political risk analysis.
Anna holds First Class degrees in History and Economics from University College London (where she studied as the recipient of the UCL Cyprus Scholarship), an MSc in International Relations from the London School of Economics and a certificate in Politics and Religion from the Macmillan Center for International and Area Studies at Yale (European International Studies Association Scholarship). She has also trained as a certified political risk analyst with Teneo Intelligence, one of the largest providers of intelligence information in the world and is also a graduate of the Executive Development Diploma for Professionals (mini-MBA) from the Cyprus Institute of International Management, having received various other professional business training qualifications, including the Engel Volkers Sales Academy in Hamburg, Germany. She was the beneficiary of an ERASMUS grant to train in critical literacy and active citizenship in Magdeburg, Germany.
She has in the past held a number of managerial positions in Lanitis Development Ltd (Lanitis Group of Companies) and has worked as corporate consultant to a number of international and local clients. Anna has also served as an Executive Director on the Board of DIAS Media, a public company and the largest media house in Cyprus. She was also the Project Manager for two EU-funded pan-European projects, Women Fit4Business and Gender Diversity in Decision-Making Positions, while currently project managing an Ernst Young scholarships programme for unemployed female university graduates, which she has helped initiate. She now serves her second term as President of AIPFE Cyprus- Women of Europe, which she also represents on the Board of the Cyprus Women’s Lobby. She is a member of Business Professional Women-Cyprus, a founding member of the Cyprus Literacy Board and the Friends of the Cyprus Institute as well as the co-founder and facilitator of three Lean-In Nicosia Circles, affiliated with Sheryl Sandberg’s Lean-In Org, including the first corporate such circle in Cyprus run in association with KPMG. A TEDx speaker and well-known media commentator with local and international press outlets, including the Huffington Post and Modern Diplomacy, she used to be part of the panel of judges for the Madame Figaro Women Awards, is a member of the Cyprus Advisory Board of the Global Entrepreneurship Network initiated by the US State Department and is a member of the Economy Task Force of the Cyprus Dialogue Forum. Anna was recently awarded the ‘Iconic Women Award for Changing the Word’ by the global summit of the Women Economic Forum.