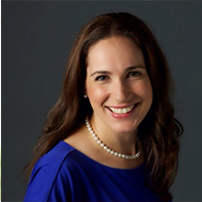 Anna Blue believes that YOUTH are the most powerful force for change. Anna is the Deputy Director of Girl Up, a leadership development organization that mobilizes, trains and empowers influential teen girl leaders through community organizing, advocacy and global networking. Anna has over a decade of experience managing teams and implementing educational and activism-based programs, becoming an innovative leader in campaign development, fundraising and communications. At Girl Up, Anna has worked to stabilize fundraising and strategically engage corporate partners and individual donors, helping to move Girl Up from a start-up campaign to a sustainable global organization that is creating tangible change for girls. Anna facilitated the creation of Girl Up’s influential advisory board, and leads collaboration and engagement efforts to ensure the board’s success. She previously worked at the Washington Jesuit Academy (WJA), a nonprofit scholarship-based middle school for some of Washington, DC’s most under-served boys, where she led a multi-million dollar capital campaign, which increased endowment and supported the construction of new athletic facilities. In addition to her fundraising efforts, Anna created and implemented the school’s first strategic plan for communications, which significantly increased media coverage for WJA. Before her move to education, Anna spent the first half of her career working in multiple sectors of policy and advocacy – trade association, nonprofit, corporate, political campaigns and in the U.S. Senate. In 2008 she found her love and passion for youth empowerment while working as a community organizer focused on increasing youth voting in three swing-states during the presidential election. Anna proudly serves on the board of directors for Girls Health Ed and Teen FemiList, both committed to changing the lives of girls around the world.