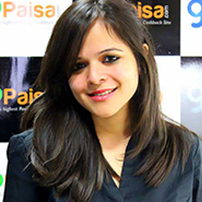 Exuberant, dynamic, youthful and versatile; a mix of all these virtues is what Ankita Jain is made of. She presently works as the Co-Founder & Marketing Head of GoPaisa.com. Born and brought up in Surat, Ankita completed her graduation with MBA in Marketing. She is one of the youngest Co-founder in the E commerce space. Owing to her interest in socializing much, exchanging thoughts and being the ice-breaker, she got a chance to work for a couple of FM channels, including stations such as Radio Mirchi and Big FM. Due to her expertise and skills in the given vertical, success followed her. But during all this, the interest in marketing did not die down. Post her marriage with Aman, who owned GoPaisa.com, her next innings commenced. Ankita put in her efforts in to the marketing front for GoPaisa.com with Aman and turned the fortunes of the company. She is a hard worker and works relentlessly to take her company to greater heights and gain higher recognition. Leveraging her knowledge in marketing she has been successful in coming out with splendid strategies and plans, which worked in GoPaisa’s favor massively. Ankita started from scratch. She made a social media page for GoPaisa which was followed by a simultaneous effort of building tie-ups for offline activation of the web page. Once the ground task was over, she started the whole marketing process with researching and strategising. She is the brain behind the new GoPaisa.com TV Campaign “Dont be a Kaddu”. She has always sought to go beyond demographics in defining and engaging consumers, always in context that brings alive brand proposition. Being just 25 years old her perspective and views are fresh and breaks the traditional norms of media. Apart from work, Ankita loves to paint and meet new people in her spare time, which soothes her mind and rejuvenates her. She has spoken at IIT Delhi Rendezvous and various other colleges . She has been covered by various news channels (CNBC, Zee news) newspapers (TimesofIndia, Financial Express & more) and also been a part of the Entrepreneurs list of Unconventional Women Entrepreneurs