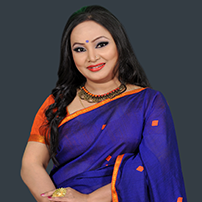 Dr. Anjana Moyee Saikia was initially trained in Odissi under tutelage of Gorima Hazarika at Guwahati. Later on she received her training of Odissi under legendary Guru Padmabibhusan Kelucharan Mohapatra and Danseuse Protima Gauri Bedi. She received valued guidance of Odissi under Danseuse Sujata Mohapatra, Rina Jana and Pabitra Kumar Pradhan of Bhubaneswar.
Anjana has performed extensively within the country and abroad. She toured many parts of USA, Denmark and Portugal.
Anjana is an empanelled Odissi soloist of ICCR, Ministry of External Affairs, New Delhi. A graded artiste in both Odissi and Sattriya dance from Doordarshan. She is also an empanelled artiste for festival of India, Abroad, Ministry of Culture, Govt of India.
She has presented several performances at Doordarshan, Guwahati and National telecast, New Delhi. Some of her major Dance Festivals in India includes Nritya Pratibha, Octave Festival, Nritya Parba, organized by Sangeet Natak Akademi, Basistha Festival,Vasant Habba, Bangalore, Uday Shankar Nrityotsav, Kolkata, Devdasi National Dance Festival, Bhubaneswar, Nababarsha Mahotsav, Guwahati, Pragjyoti National Dance Festival, National Festival of Odissi Dance and Music, Bhubaneswar, Nritya Santati, Mumbai, Sangeet Madhuri, Guwahati etc. She has been trained in Sattriya, under Guru Borbayan Ghanakanta Borah, a recipient of Sangeet Natak Akademi Award. She has performed in many Sattriya dance recitals and won accolades for her sense in the dance style. Anjana is noted for her fluidity in dance and the techniques of which she uses into choreography. She has been presenting many stage productions in her own choreography. ‘Chitrangada’ and ‘Shyama’ are her recent choreographic plays staged at different places of India.
Theatre has been a passion for Anjana. She has acted in title and lead character for some of the well-known drama productions namely Chitralekha , Purush, Jerengar Sati, Nisanga Nayak, Mouse Trap, Chitrangada, Shyama etc.
Anjana holds M.Sc. and PhD in Statistics and at present is working as Lecturer in the Department of Community Medicine, Gauhati Medical College, Guwahati.
Anjana founded an institution Darpan Dance Akademi at Guwahati, where she offers training in Odissi, a classical dance form of Odisha. Besides training she has been working with an idea for choreographic creation with special emphasis on developing new innovative work.