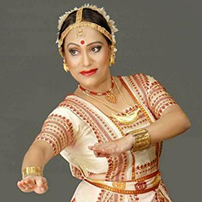 Anita Sharma, a leading Sattriya exponent, is one of the most powerful and compelling dancer of India. Anita conquered an enviable place in the world of Sattriya, an exquisite dance form of Assam. She has devoted herself to learn Sattriya dance under Padmashree Nrityacharya Jatin Goswami. Anita be it teaching, performing, prorogation, preservation and encouraging for more than a decade she has totally devoted herself to promotion of this dance form. Born in a distinguished family with a rich cultural heritage Anita was initiated into the field of Sattriya when she was barely seven years old. She had her early training under late Guru Roseswar Saikia Barbayan.
She also has been trained in the art of Odissi by Guru Smt. Garima Hazarika (a Sangeet Natak Akademy Awardee) and later she has gone under training of Late Guru Padmabibhusan Kelucharan Mahapatra at Bhubaneswar. She is the founder Director of her own institution, Abhinaya Dance Academy, Guwahati where she imparts training in Sattriya Dance to young aspirants. On behalf of the Academy she organized Parampara Dance &Music Festival annually.
Anita holds a master’s degree an Assamese literature from Guwahati University and has done extensive research work relating to the Sattriya dance form. She has been awarded two years of Junior Fellowship by the Ministry of Human Resource Development, Deptt. Of Culture, Govt. of India for the year 2005-2007 on “Different form of Folk elements of Assam in Sattriya Dance”. S She has done extensive research work relating to the Sattriya dance form. She has been doing research work on “Ojapali” a rich cultural tradition of Assam under Sattriya Kendra (Sangeet Natak Akademi).
She is an ‘A’ graded artist of Doordarshan Kendra, New Delhi. She is an empaneled solo artist of the I.C.C.R.
She had the privilege of performing in almost all the major dance festivals of India such as Khajuraho, Konark, Mahabalipuram, Bhayachandra, DIAF, Nritya Sangam to name a few. She has also performed in the different parts of the country under the banner of Sangeet Natak Akademi. A widely travelled danseuse she has presented her art in U.K., Sweden, U.S.A., Turkmenistan, Kazakhstan, Kyrgyzstan, and Russia under the banner of Indian Council for Cultural Relation (I.C.C.R), Sydney dance festival, Australia and Erasing Borders & Drive East Festival, New York,2014. & Bangladesh.
She has been conferred with the prestigious Sangeet Natak Akademy puraskar (Award) for 2014 by the Govt of India.
She has been conferred with Devadasi Award, Nrutya Bidushi Sanmman, Natyasri, Prag Sanmman & Bhrarata Kala Rakshini.