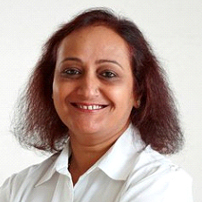 Anita Nayyar is a veteran of Indian media being an integral part of its growth. As CEO she took on the mandate to expand the Havas Media Group footprint in these lucrative emerging SA markets in 2006.
Under her leadership Havas Media Group in India has grown exponentially. It has expanded its offerings as an integrated communications group for traditional, digital, mobile, performance marketing and out-of-home. The agency has grown 10 times in 8 years.
This 2015 RECMA ranked Havas Media in the Top 5 Media Agencies in its 2014 Qualitative Evaluation. Havas Media was ranked as the No.2 Indian Media Agency in the Agency Report Card 2014 by Campaign India. In 2013 RECMA graded Havas Media at No.1 in Compitches in both their preliminary reports. RECMA rated Havas Media Group as the fastest growing media agency in India at 43%, 3x the industry in 2012.
Anita was voted the 2nd most influential media person in India by The Brand Equity Survey in 2006 and has always been in the top list of the most influential media personalities ever since. Much awarded she has been recognized every year for her leadership and Havas Media has won at the agency level for its work.
Her 30+years in the industry have seen her passionately manage a mega portfolio of brands across sectors. A prominent speaker, moderator, panelist and judge at all major events and awards year on year; her views and opinions have been sort by both Indian and international media.
She started and went on to lead leading agencies in India including Saatchi & Saatchi, Ogilvy & Mather, Initiative Media, MediaCom and Starcom Worldwide.
Anita’s area of expertise is with business, brands and people as well as media, digital, mobile, entertainment, OOH and sports. She holds a Bachelors degree in Microbiology and has done her Post Graduation in Advertising and Marketing with a Masters in Management.