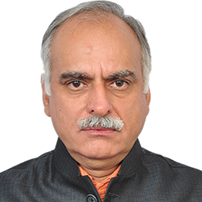 I am a journalist with experience of more than 35 years. During this period I have worked with different newspapers including Hindustan Times where I had the longest stint of nearly 20 years, DNA ( ZEE GROUP), The Tribune, National Herald, Greater Kashmir ( Delhi Bureau chief), Daily Excelsior, Kashmir Times, these are the leading newspapers of Jammu and Kashmir and Gujaratmitra, among the top Gujarati newspapers of Gujarat. Currently I am into multi-media as apart from writing for newspapers. I am also appearing on a number of news channels as an expert debating on aforesaid and other issues. Also, I am regularly contributing on broadcast media particularly All India Radio. Areas of Expertise: Political affairs, Internal Security related issues, Kashmir and Indo-Pak affairs, matters related to different aspects of governance at the Centre and in states. Qualification: B Sc ( Jammu University) , post-graduate diploma in journalism (Bharatiya Vidya Bhawan) and post-graduate diploma in journalism ( Jammu University).
I belong to Jammu city of Jammu and Kashmir where I began my journalistic career before shifting base to Delhi in 1987.