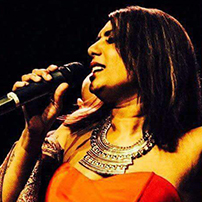 She displayed a prodigious musical talent from an early age. By the years she showed remarkable talent in singing and to write/create songs. From 2011 till now she released about 5 albums, her two favourites are Rock ur RootZ and The Essence;
In 2013 she released „Rock ur Rootz”, on the occasion of 140 years of immigration (India-Surinam),which was a tribute to her Indian-ancestors.
In 2014 she finished “The Essence”, this album contains songs of many cultural happenings, and therefore this album is donated for fundraising purposes, for a new (Hindu)Temple in The Hague-Netherlands.
Her impressive talent credits can be researched with many top recording artists and she has a large performance history.
As well as music, she is involved in humanitarian and political projects.