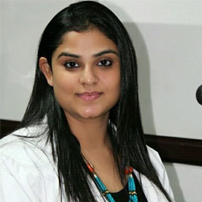 She has founded Netram Eye Foundation with the vision to benefit the masses with best quality yet affordable treatment.

She has done her Masters in Ophthalmology from the prestigious King George Medical University, Lucknow with academic accolades in the year 2009.

Driven by her passion to cure reversible blindness, she did her fellowship in Cornea from Venu Eye institute & Research Centre, Delhi

During her Fellowship, Dr Anchal conducted many awareness campaigns for upbringing the social message for eye donation.

Dr Anchal has also done her registrarship from the renowned Maulana Azad Medical College, Delhi, with particular expertise in the field of Cornea and medical Retina.

She has conducted over 150 eye camps in eight states.

She has started project ROSHNI ( Rural optical service an honorary netram initiative) a unique concept where gasses are delivered at door step to poor and needy.

She has launched VARDAAN Health card to benefit the masses which cuts all the medical expenses.