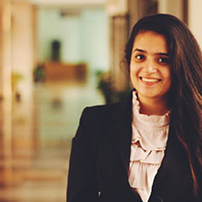 Anaita Singh Health strategy lead, Dimagi India Perceptive, empathetic, yet an eternal rationalist, Anaita has a mind that is always ‘on’. A natural at connecting the dots, Anaita found her calling in public healthcare, and soon realised that sustainable impact requires problem solving and emotional intelligence in equal measure.

Anaita has worked across India and Africa in public health, policy research and strategic planning and analysis.

She currently leads Health Strategy at Dimagi India, a young social enterprise on a mission to build technology that improves the efficiency and quality of impact-driven work at scale, globally. Prior to this, Anaita was working as a Specialist Consultant at the Boston Consulting Group, where she developed a Governance Innovation Model within the State Public Health system, and launched ‘MISAAL’, a public health scorecard to drive health outcomes and ensure translation of state reviews to on ground actions.

After completing her Masters from the Indian School Business, Hyderabad, Anaita joined the Clinton Health Access Initiative in Lesotho, Africa. During her stint, she led a WB Funded Contract to deploy mobile-first technology to reduce TB/HIV across five (of 10) districts. She also conceptualized and developed a mobile application and dashboard for the National Sample Transport System run by Riders4Health along with the MoH across the entire country.

Prior to ISB (where she founded the Public Policy Club to enable students with similar interests to get job opportunities in this space), Anaita worked on the National Health Insurance Scheme (Rashtriya Swasthya Bima Yojana) with the Punjab Government in the capacity of an Implementation Analyst. A paper on her findings was published by CPPR (Centre for Public Policy Research) and the suggestions were taken up at the Annual RSBY (Rashtriya Swasthya Bima Yojana) Summit, 2013 in Kerala.

She has worked on the national campaign of the Indian National Congress as a Senior Research Associate and was also given the additional responsibility of Executive Assistant to the Chief Whip of the party in the Lok Sabha (2010/2014). While she started her professional career at Citibank as a Graduate Management Associate (a leadership program, given the paradigm shift in the public sector, with professionals from the private sector/strategic consulting deploying their skill sets across Government/public projects and initiatives, Anaita wanted to build those skill sets early in life. The objective was simple – to be able to do the same and contribute to the best of her capabilities to create impact, specifically in public health and nutrition.

Anaita’s publications include Co-investigator, MDR-TB Patient Pathway study; Lead Author, ‘Using Mobile Phones as Barcode Scanners to Optimize the Sample Transport Tracking System in Lesotho; Author, Community-Based TB Screening and HIV Testing for Ex-Miners in Lesotho.
She has also been awarded with the ‘Young Global Leader’ scholarship for expertise in technology and healthcare at The Web Summit, Dublin

She graduated in B.Com (Honors) from Shri Ram College of Commerce, Delhi University.