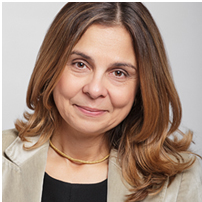 President of the Portuguese Pharmaceutical Society

Ana Paula Martins (b. 1965) took her degree in Pharmaceutical Sciences at the University of Lisbon Faculty of Pharmacy in 1990. She also holds a Master’s degree in Epidemiology by the New University of Lisbon Faculty Of Medical Sciences (1995) and a PhD in Clinical Pharmacy by the University of Lisbon Faculty of Pharmacy (2005), where she is currently Assistant Professor at the Department of Social Pharmacy.
Her activity as researcher is presently done under iMED.UL [University of Lisbon Medicines Research Institute] in the fields of Pharmacoepidemiology and Social Pharmacy. At the moment, Ana Paula also tutors two PhD projects in the areas of new medicines’ safety and oncology comparative effectiveness.
Previously, she was Institutional Relations Director for ANF [Portuguese National Association of Pharmacies] (2014-2015), External Affairs and Market Access Direct or at MSD Portugal [Merck&co. USA] (2006-2014), Director of the Centre for Pharmacoepidemiology Studies of ANF (1994-2006) and Secretary-General of the Portuguese Pharmaceutical Society (1989-1992).
In the public service, Ana Paula was Advisor to the Minister of Education and to the Minister of Parliamentary Affairs Attached to the Prime-Minister (1992-1994), where she held responsibility over the National Programto Fight Drug Addiction and the Schools Health Promotion Program. Since March 2015, by appointment of thePortuguese Parliament, she is an alternate member at the National Council for Bioethics.
In scientific societies she holds positions as a Member of the Board of the Portuguese Association of Epidemiology and President of the Portuguese Pharmacotherapy and Clinical Pharmacy Society. She was also a member of the task-force for the evaluation of health technologies of EFPIA (European Federation Pharmaceutical Industry and Associations) on behalf of APIFARMA (Portuguese Pharmaceutical Industry Association).
Early in 2016, Ana Paula was elected President of the Portuguese Pharmaceutical Society, the competent authority for the profession of Pharmacist in Portugal.