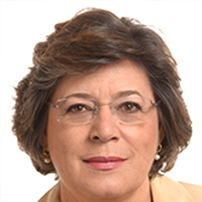 Member of the European Parliament, Brussels from Portugal

Ana Gomes is a Member of the European Parliament since 2004. She was re-elected in June 2009 and in May 2014 for a third term.
In this mandate (2014-2019), she is full member of the Committee on Civil Liberties, Justice and Home Affairs, and of the Subcommittee for Security and Defence, as well as full member of the Delegation for the relations with the United-States and the Delegation to the Parliamentary Assembly of the Union for the Mediterranean . She is substitute member on the Foreign Affairs Committee and on the Subcommittee on Human Rights. Ms. Gomes has been Rapporteur for Libya, Iraq, Saudi Arabia and the PCA with Indonesia, on the “EU CBRN Action Plan” report, the “Maritime Dimension of CSDP” report, on the “Human Rights and corruption” report, among other files.
In her previous mandate, she was elected Coordinator for Foreign Affairs of the Socialists & Democrats Group in the European Parliament.
Her main work focuses on foreign affairs, namely security & defence, human rights, justice and home affairs, fight against tax havens and corruption, and the rule of law.
Ana Gomes’ academic background is Law. She was a career diplomat since 1980 until she suspended it to enter party politics in 2003. She had joined the Portuguese Foreign Service in 1980 and served in the Portuguese Missions at the UN in New York and Geneva and also in the Embassies in Tokyo and London. Between 1999 and 2003 she was Head of the Portuguese Interests Section and then Ambassador in Jakarta, where she played a role in the process leading up to the independence of East Timor and in the reestablishment of diplomatic relations between Portugal and Indonesia.
She is married, one daughter, 3 step children and 7 grand-children.