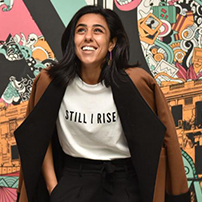 Amy Mowafi is the co-founder and CEO of the MO4 Network, one of the Middle East’s leading digital creative agencies and media companies with offices in Cairo, Dubai and London. Launched in 2012, MO4 Network’s 250+ storytellers create strategy, content and campaigns (from concept to production) for over 140 international, regional and local brands. MO4 Network is also the media company behind seven innovative online publications (CairoScene, CairoZoom, ElFasla, SceneNoise, StartUpScene, SceneArabia and SceneEats) which reach millions of readers across the Arab World daily. Amy, a mother of two, was born and raised in the UK where she graduated with a BSc (Hons) in Business Administration from the University of Bath before moving to Egypt in 2002. She spent the first decade of her career as a writer and eventually managing editor of a leading lifestyle publication before publishing two regionally bestselling books.