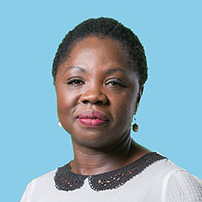 Amma Asante was born in Ghana and together with her mother moved to the Netherlands at the age of six years to join her father. She was the eldest daughter in a migration family and was taught to work hard and grab all the opportunities live threw at her. As the first person in her family Amma went to the University. She gained a Masters in Political Sciences from the University of Amsterdam. Amma has a broad professional career in the public sector as advisor on social affairs.
Amma became politically active at the age of 25 when she was elected member of the Amsterdam Municipality in 1998. She served for 8 years. On september 7th 2016 Amma became member of the Dutch Parliament. She is the spokesperson on Higher Education. Amma is married to Emmanuel Baddoo and mother of Serena and Shemaraiah Baddoo. Amma loves spending time with her family, reading, travelling and running.