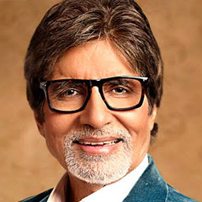 In 1969, Bachchan made his film debut in Saat Hindustani. Although the movie tanked at the box office, Bachchan still managed to capture the attention of directors. Soon enough, the offers started rolling in.
By the early 1970s, Bachchan had garnered popularity with audiences as the “angry young man” in a series of successful Hindi feature films. His starring role in Zanjeer was particularly instrumental in launching him to stardom as an action-movie hero. Bachchan’s performances in films like Laawaris, Coolie, Naseeb, Silsila, Shaarabi and Jaadugar continued to enamor fans of the tall and handsome action hero, and also landed him multiple Fanfare Awards. From the 1970s through the early 1980s, the swashbuckling Bachchan appeared in more than 100 films. He seized opportunities to work with India’s most acclaimed directors, such as Prakash Mehra, and dominated the silver screen with films like Trishul, Sholay and Chashme Buddoor. In addition to acting, Bachchan’s roles often required him to sing.