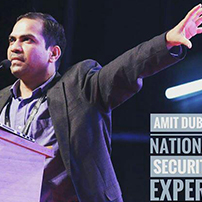 Amit is a renowned National Security Expert and a Crime Investigator on Cyber Forensics and Ethical Hacking to various Indian Investigation Agencies and Police deptt.
A prominent speaker and a renowned name on national and international cyber security conferences, Amit is regularly quoted in Indian print and electronic media on global cyber issues. He is also invited by various arms of the Indian government, including its defense forces to train their cyber professionals, acknowledging his authority on cyber security.
Amit also run a Radio Show ‘RedFM Hidden Files’ on 93.5 RedFM Saturday 10am and Sunday 2:00PM, where he tells cyber crime stories to spread cyber safety awareness.
A commonwealth UK, chevening fellow, He is also an advisory member to various startup boards and security forums. He is part of Cyber Security division at Tech Mahindra Ltd. CNN-IBN featured him as National Security Expert and covered few of his cases in a documentary on “Cyber warfare in India” in 2012.
He has also authored a book named “Return of The Trojan Horse, Tales of Criminal Investigation”, which includes few of his interesting and thrilling crime cases that he has worked and solved successfully. He writes regular columns in News Papers and Children Magazine “School Live” to spread awareness around Cyber Security.
Amit is known for his hacking expertise and proactive approaches to tackle the expected cyber-attacks. His long experience of working with companies like Samsung , ST-Microelectronics, Qualcomm, gave him enough exposure of Mobile Software and Firmwares. Few of his demonstration of hacking a mobile in just 30 seconds got viral on various social media networks.
Amit holds 17 years of rich experience in Telecom and Mobile Phone Software Domain with leading telecom MNCs (Samsung, ST Microelectronics, Qualcomm, Tech Mahindra etc.). He holds B.Tech in Electronics and Instrumentation and M.Tech (Telecom Systems) from Indian Institute of Technology, Kharagpur.
Amit has been awarded at many international platforms including the prestigious Golden Peacock Award of year 2015 at Dubai for Best Innovation of the Year, Aegis Graham Bell Award in 2015 for Best Innovation in Cyber Security on Mobile Device and by Indo-American Chamber of Commerce in 2014 for Best Innovation for Smart Cities.