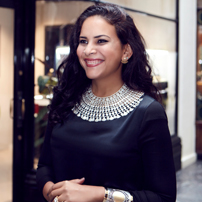 Amina Ghali, Azza Fahmy’s youngest daughter, joined Azza Fahmy Jewellery in 2005 and spent 3 years working behind the scenes designing and developing pieces across the brand’s various collections. She impactfully endorsed and applied the brand’s ethos of producing unique pieces with subtle historic and cultural references with a contemporary modern twist.

The yearning to be a designer began at an early age when visiting her mother’s workshop, however, Amina began realizing her talent when she started putting her passion to practice. Amina studied contemporary jewellery in Italy’s Alchimia School for a year, followed by a BA in jewellery design and silversmith at the University of Central England, Birmingham, UK.

After years of researching and practicing her art, Amina successfully launched her first Azza Fahmy Jewellery collection in 2008. She has launched various collections since and designs side by side Creative Director Azza Fahmy as her design partner. Amina was also responsible for the ‘Azza Fahmy for Matthew Williamson’ Fashion Week SS’13 & AW’14 retail and catwalk collections in addition to the launch of the second ‘Azza Fahmy for the British Museum’ Bespoke culture collection celebrating the museum’s exhibition ‘Egypt: Faith after the Pharaohs’ and the highly successful Wonders of Nature series.

In 2016, Amina was named among Britain’s “Professional Jeweller’s – Hot 100” as one of the most influential jewellery talents and industry flag bearers.