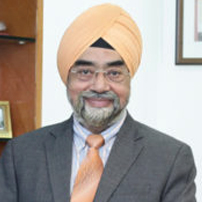 Graduated in Arts and Law from the University of Delhi, in 1972. Secured the first position in law and won the gold medal.

Practising in the Supreme Court and High Courts in India.

Was invited as an expert on Indian laws by various Courts/Tribunals of the United States, United Kingdom and Australia.

Received many awards and recognitions, including the “Leader in the Profession – Leader of the Bar Award-2007” from the Bar Council of Delhi, in March 2007 (first time the Bar Council, a statutory body under the Advocates Act, has conferred this award). Received the National Law Day Award-2006, from the Prime Minister of India, for the contribution made in the practice of Civil Law. Received the award for rendering meritorious legal services from Delhi Citizens’ Forum for Civil Rights in 2002. Was awarded “Outstanding Jurist – 2000” by J.N. Kaushal Jurisprudence Centre, New Delhi. Received “Sikh of the Year 2010” Award from Sikh Forum International, London, UK.

Mr. Chandhiok was instrumental in creating and implementing many policies and projects for the benefit of the Bar, at a time when there was no social security in the form of financial assistance to junior lawyers and for disabled or indigent advocates. He advocated the necessity of creating a legislative sanction in this regard and thus, the Advocates’ Welfare Fund Act, 2001 came into being. He played a vital role in creating various infrastructure facilities for members of the Bar in Delhi.

Mr. Chandhiok is married to Nomita, a medical doctor by profession, currently employed as Scientist ‘G,’ Division of RBMH, Indian Council of Medical Research (ICMR), New Delhi, the apex body of medical education and research in India. They have two children – a daughter and a son. Daughter is a MBA and is currently employed with the Lloyds Bank in the UK. Son, after his Master’s in Law from Oxford, was with M/s Allen & Overy, U.K., for some time. He heads now Chandhiok & Associates, and is based in New Delhi.