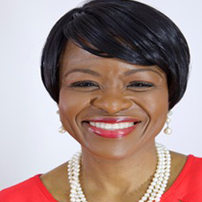 Althea Grant is a Family Lawyer in England who stepped away from her profession to become a International Professional Speaker in 2012 and an Author in 2015. She is a Professional Speaker, an Author, Event Promoter and 1-2-1 Mentor and Trainer.
She has spoken on many stages in UK and internationally. She has shared the Stage with such luminaries as Les Brown, Anthony Robbins, Donald Trump (now US President) Lord Sebastian Coe, Andy Harrington (Althea’s first Mentor) and in South Africa at the same event as Keynote Speaker Sir Richard Branson, Raymond Aaron, Greg Secker, Dr John DeMartini, Robert G. Allen and many more. In 2013, Althea met Les Brown when they spoke at the NAC in Jo’burg. Mr Brown was impressed with her speaking abilities and introduced himself as the mentor that will bring out ‘the greatness in you’. He became her 1-2-1 mentor, friend and business partner. Les’ unique training has taken Althea’s expertise and impact with audiences to levels that is beyond average and allows her to reach the hearts of her audiences worldwide. She is a strong confident engaging speaker with communication skills drawn also from her expertise as a Lawyer. In 2015, Althea launched into the professional event management arena, by organizing and promoting the successful, “LES BROWN IN LONDON I” event. In January 2018, Althea again Promoted and hosted LES BROWN IN LONDON II, THE major event of 2018 bringing together speakers and delegates from USA, Canada, Europe, Africa, Greece and of course England Wales, Scotland and Ireland. The Iconic motivator and supreme Speaker Les Brown headed the event speaking to capacity of 1200 delegates and involving major celebrity endorsements including, International Boxing Champion Anthony Joshua, interviews on TBN and Sky’s Good Morning Show. Currently, Althea’s professional speaking and entrepreneurial skills continues to take her to fulfill the goals that she has set for herself and thereby to impact the lives of those who are aligned with the message of hope and transformation that she brings.Althea knows that her destiny is to help others find their #BetterMUSTcome and go from ‘Adversity to advantage‘.