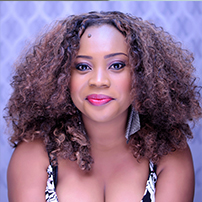 Alex Okoroji is a Nigerian Actress & Multiple Award Winning Media Personality – Currently ranked as One of the ‘Top 250 Most Influential Women Leaders’ in the World by Richtopia, Often referred to as the “Queen of Expression” for using different mediums of the Art to empower people – having reinvented herself at every stage of her 12 year career as an Actress, Writer, TV Personality, Talk Radio Host, Speaker, Author, Thought Leader & Global Influencer – featured in over 250 Media Platforms around the world.

She is the Creator of The NAKED Philosophy & CEO of The BRAG Media Company – a Digital Multi-Media Enterprise… and Honoured as a Nigeria Goodwill Ambassador for her Positive Contributions to Humanity, a 2017 Peace Achievers Award as Peace Builder “Media Personality of the Year” and Recipient of the 2017 African Icon Awards as a Global Ambassador.

She is listed in Charles O’Tudors 35 Personal Brands-To-Watch 2017 (The Global List) and was spotlighted as a 2015 Global Consciousness Raiser, a 2016 Guardian Woman, RB Magazine Blogger of the Season (Spring 2015), an International contributor to THE HUFFINGTON POST and is the “First African Woman Living In Africa” to be featured in Women Rock Project for her wisdom – and listed in the ‘Actress Category’ alongside Hollywood & Bollywood Actresses like Vidya Balan, Kate Winslet, Drew Barrymoore, Amy Walker, Susanne Somers, Debbie Allen, Lady Gaga and Humanitarians and Thought Leaders like Ariana Huffington, Melinda Gate, Hillary Clinton & Chimanmanda Adichie.

She’s a “Women Mentoring Women’s Mentor” for Idea Builders Global Initiative, and International Ambassador for SHE M.A.T.T.E.R.S MOVEMENT in USA.

She is an Advocate for Expression, a Reinvention Activist and a Multi-Platform Ambassador for Self-Empowerment & Transformation – known for championing the movement for Raw & Honest Expression – on a mission to empower individuals to achieve the FREEDOM mindset, they need – to challenge the illusion of perfection and overcome the most self sabotaging emotion of all – FEAR.