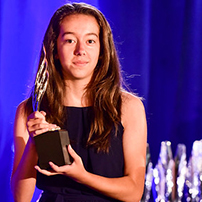 Alexandra Allen is a student who thrives on high Expectations and good judgment, and has attended The British School of Beijing in China, St. Luke’s School on Virginia, Sidwell Friends School in Washington DC, the all- girls Briley School in New York City, and the all- girls National Cathedral School in Washington DC. She has lived with her family in Beijing, Washington DC. And new York and, enjoys reading Classics, piano and kayaking. As language electives, she has studied Spanish and Latin for many years, founding the school Latin Club That competes nationally against other schools, and investigates classics and Latin History/culture. She enjoys advanced math and science having won a Valedictorian award and competes in math and robotics representing her school. There is the desire to help other about her whether in the classroom or around the world which has led her to travel throughout the U.S. and to a dozen countries overseas to raise awareness through film production for.