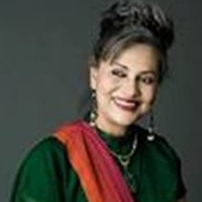 The name Ms. Alakananda Roy, conjures an image of grace and elegance. Her versatility comes through in her innovative dancing styles and creative stage productions. Taking great pleasure, in being involved with varied creative activities, did never refrain her from extending genuine care and compassion to the society at large.
Her journey begun as an uninhibited and ambition-less dancer, who sought pure joy in performing her art, without being confined to the profession of DANCE. Never edged herself towards competition nor did she seek popularity. She did not accept remunerated stage performances until she started her social initiatives in 2000.
At the tender age of 17, she surrendered herself for a lifetime, in an absolute devotion to Shri Aurobindo and Shri Ma. She went through an intense spiritual experience as she met the Mother at Auroville in Pondicherry. Through life’s trials and losses, her spirituality gained strength from her faith in the Universal Supreme Energy.
Amidst all her work she remained conscious of her social responsibilities and always aspired to give every individual a fair chance in life. That made her initiate Inspiration Foundation, an initiative that trained under-privileged children in dance, music, recitations and art.
She has always been unprejudiced and non-judgemental. That perhaps, initiated her to adopt the secluded world of convicted individuals in the Correctional Homes of West Bengal, as her arena and work for their welfare, through Dance and Music. Her organization Touch World operates to care for the children of the convicts, deprived of family support.
Her work as a social initiator through dance and music, has decorated her with numerous awards and honours, including Rajya Sangeet Academy Award(2014), Tumi Ananya(2014), Bharat Nirman(2008), Sharbabharatiya Sangeet –O- Sanskriti Parisad(2014), Michael Modhusudan Award, Bongo BIbhushan(2014). However she accepts all the honours bestowed on her with humility and maintains that any award given with respect and love, is of equal importance to her.
The reward she treasures however is the unconditional love of the millions that she has received and is still receiving. Her sole expectation from the society is understanding, compassion, forgiveness and empathy for the less fortunate.