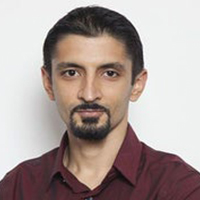 AKSHAY NANAVATI (from India), upon overcoming drug addiction in high school, he enlisted in the Marines despite two doctors telling him boot camp would kill him because of a blood disorder he was born with. After serving one tour in Iraq, he was diagnosed with PTSD and consequently struggled with depression and alcoholism that pushed him to the brink of suicide. In 2012, he left a comfortable corporate job to drag a 190-pound sled 350-miles across the world’s second largest polar ice cap for a month and came back home to build a business from the ground up. He’s scaled the Himalayas and is the author of “Fearvana” that received a Forward by the Dalai Lama. He pushes his physical body to the limits for service; running 167 miles in seven days across post-war Liberia, West Africa, delivering clean water filters and school supplies to families. Raised in India, he resisted the ritualistic, religious traditions of his homeland, but his recent divorce has him on a new quest – perhaps, the most important of his life experiencing a deeper connection with God.