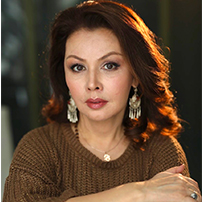 Akmaral Batalova is a journalist and a film producer from Kazakhstan. She graduated from the Kazakh State University, studied in the Diplomatic School of Madrid and holds a Master’s Diploma of International Affairs from the Complutense University, Spain. She covers “The Astana Process” and produced several documentaries about the Syrian crisis, based on her interviews of all the participants of these international talks, and both sides of the conflict. Akmaral was commissioned to film a documentary about the work Kazakhstan has done as a non-permanent member of the UN Security Council, and interviewed various think-tanks, representatives of different countries and the UN Secretary General, António Guterres. Akmaral was awarded the “Woman of the Year Award” by WinTrade – an international women’s organisation in the UK. She was also recognised by the Russian Ministry of Defence for her balanced and unbiased TV reports and articles from Syria covering the humanitarian issues.