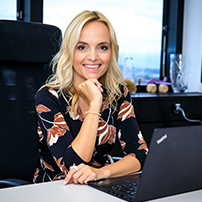 Ms Vodnik worked in media for 14 years, first as a journalist, then as editor-at-large and TV host, and went on to launch the Slovene TV station Paprika when she was just 29. As an entrepreneur and leader she realized how very important is to lead people with positive energy. At its peak Paprika TV employed more than 70 people, after five successful years Ajša decided to sell her stake in the company and leave the field of media. During her time there she hosted more than 300 interviews with top Slovene and international businesspeople, leaders and opinion makers. She had privilege to interview also such notable names as American President Bill Clinton and General Colin Powell.

Ajša holds a master degree in communication, and from 2007 she has worked as consultant for strategic communication, consultant for business communication and communication coach for managers of the biggest Slovene companies. She is currently the Chief Executive Officer of the American Chamber of Commerce in Slovenia – AmCham Slovenia. She has been elected for the Vice President of AmChams in Europe, an umbrella organization for 45 AmChams from 43 European and Euroasian countries and with that Slovenia took over the seat of the organization.
She is a co-author of the AmCham Young Professionals ProgramTM, a platform for young leaders which aims to build their personal and career development. She is passionate to empower a group of next generation business leaders who want to develop their talents and empower others. More than 1000 people, between 20 to 40 years, have been involved in the program so far and it is growing every year.
Ajša is also the co-author of Partnership for Change program- unique collaboration between public and private sector- which won European Award Creative Network 2016. Additionally, she is an active mentor to entrepreneurs and business professionals and sits on the Strategic Council for the ABC Accelerator in Slovenia.
She lives in Ljubljana with her husband Rok and three children Pia, Živa and Jan, who are her best coaches for recognizing the most important values of life.