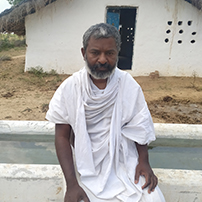 Right after completing his B. Tech and M. Tech from R.E.C Warangal (now National Institute of Technology or NIT) in 1993, based on inspiration from reading the book “Satyartha Prakasa” by Swami Dayananda Sarawasti, Acharya Ravindra decided to pursue Vedic studies full-time. He joined a gurukul in Gujarat — Darshan Yog Mahavidyalaya — to learn Sanskrit Vyakaran and other shastras. There he mastered the complete Vyakaran Shastra (till Mahabhashya) in 4 years of intensive study. Along with Vyakarana he also studied Yogabhyas, Darshan shastras and many Vaidik principles. He continued his studies with various other masters around the country – Nirukta from a gurukul in Telangana, a part of Meemansa and Kalpa Sutras from Shri Vasudev Paranjepe in Mysore, Saswara Vedapatha from various gurus including Shri Ganesh Jogalekar from Gokarna.
For several more years (totaling more than 16 years) he continued his studies in shastras – Siddanta Siromani of Bhaskara Acharya, Surya Siddanta of Mayaasura, Satapatha Brahman, Darshan Shastras, commentaries of Vedas made by Swami Dayananda and other various panditas of Arya Samaj, Veda commentary by Sayana, Manu Smriti, Kautilya Artha Shastra, etc.
Acharya Ravindra established and ran gurukul in Rajasthan and Haryana for several years where he taught Vyakarana to several students. After contemplating the worrisome situation in today’s Indian society and throughout the world, he came to a conclusion that much more needs to be done to be able to guide Humanity towards reestablishment based on the grand vision encapsulated in our shastras and produce leaders who can reverse the degradation. He started studying various aspects of our current society – financial system, political system, agriculture, diary, etc. Now he has a deep understanding and knowledge in cow based Zero Budzet Natural Farming, breed develolpment of indian cows, panchagavya etc. He has trained many farmers about cow based Zero Budzet Natural Farming through training camps and worked with various governmental policy and research organizations, he develops foundational principles based on which systems in these areas should operate.
Acharya Ravindra is one of the few scholars in India who has deep knowledge of not just one or two areas traditional systems of knowledge, but of an encyclopedic scope. He continues to teach shastras to scholars, and conducts training programs and workshops for socially active citizens of India who have deep interest and curiosity about our ancient culture
Right now he is leading ‘Vedic Gram project’ in Hamirapur district, Uttar Pradesh .