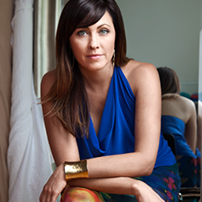 Abi Ferrin has a passion for empowering women and has been doing so through her eponymous clothing line for years. As a fashion designer, she has had a perfect platform to inspire women, and as a philanthropist she created her company to support women while dressing them.

From day one, Abi Ferrin has been committed to transparency in the manufacturing of her product. From her own in-house Texas atelier where 50% of her product is created, to the outsourced manufacturers she selects, she personally ensures that the environments are clean and that happy people who are paid honest wages sew each garment that bears the Abi Ferrin label.
Along with her Flagship Boutique in Dallas, Abi Ferrin sells her clothes to exclusive boutiques and resorts globally and has received much recognition for her unique approach to design and entrepreneurialism by many.

• Texas Top Designer by Stanley Korshak in 2007
• Excellence in Design Award by DIFFA in 2009
• Featured Designer for the Super Bowl Fashion Show by the NFL Wives in 2009
• Inducted into the Vogue 120 in 2013
• Cause Champion for the Mary Kay Foundation’s Don’t Look Away Campaign.