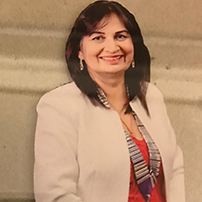 Mrs. Bains is a philantropreneur who has generated not just jobs but hope in many young women. She worked for the civil services and at the job center for years. What she understood in those years was beyond a common man’s intellect. Her perspective of an unemployed girl coming from a foreign land was not just professional but personal. She could envision herself on her own struggling days when she turned a widow and had 2 daughters to raise. Most people turn a deaf ear to people’s problems but Mrs. Bains empathized with them.

She has served as Vice Chair – SAHIL Single Parent Group and Vice Chair of Asian Women’s Centre in 1986. Abhnash was involved in highlighting problems facing ethnic minorities in their employment search. This lead to her establishing the Hounslow Ethnic Language and Literacy Office (HELLO). She has also worked for the Employment Service formerly known as the Manpower Services Commission from 1980 to 2000. While working for the Employment Services as Executive Officer she worked in various job centers including West Ealing and Fulham. Her duties included efficient customer service, staff management and setting realistic targets.
Other Posts served-
* Governor of Crane Infant Junior School, Hanworth
* Committee Member of Ealing Dyslexia
* Committee Member of National Youth Executive (Co-opted)
* Counselling/Mentoring for EACH (Ethnic Alcoholic Counselling’s in Hounslow) ethnic minorities with drug, alcohol problems and encouraging them to look at the roots of their problem.
* Member of the Patient and Public Involvement Forum for West London Mental Health Trust from August 2007 until March 2008.
* Member of the Women’s Radio Group in September 2008
* Full Member of British Society of Clinical Hypnosis from November 2000 until Present.
Volunteering History-
She has contributed towards other charities and have been thanked by The Mulberry centre, ASDA Charities and Liesel Angel Trust. Mrs. Bains also contributes a lot towards Cancer and Diabetes projects through her charities. She has worked as the Diabetes Officer for Lions Diabetes Lifeskills project. A widow at the age of 26 and a single parent to 2 daughters, she has faced depression and trauma. That never stopped her however and she started Ishkama, a non-profit organization to fight mental illness in the community. She is a certified therapist and hold the following credentials.
* Trained as NVQ Assessor, Achieved NVQ D32/33/34
* 1998 – 2000 Diploma in Therapeutic Counselling (Psychodynamic)
* Diploma in Clinical Hypnotherapy from London College of Hypnotherapy (LCCH)
* March 2000 Certified as a ‘Reiki Masters’ from The International Reiki Healing Training Centre
The Chairman of the Judges from “The Best Business Awards” said: “Mrs Abhnash Bains is a talented philantropreneur whose main interest is to provide a range of quality beauty and well-being therapies. The idea of setting up a KIA Beauty salon in an ASDA store is brilliant and a great way for stressed out women to fit in some pampering while out shopping. Well done to Mrs Bains for coming up with an innovative way for working women and mothers to enjoy and benefit from some relaxing therapies that won’t overstretch their purse.”