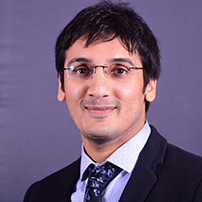 In a world where everyone is in a race to make money, Abhishek chose to follow a different path. The path of giving financial freedom to others. This mission was borne from his own struggles in reaching a financial goal at the tender age of 17 as he unsuccessfully tried to save money from his pocket money to throw a grand party for his parents 25th wedding anniversary. He learnt through his struggle that unless directional investment is done, financial goals of many die unfulfilled. Armed with this experience after having become one of the youngest CFP (Certified Financial Planner) certificants from Kolkata, Abhishek along with his life partner Shrradha founded Trustedarms Wealth Management with a mission of reaching out to at least one person a day and empower him or her to plan and reach their financial goals. This was enabled by reaching out to people through radio shows and programs in various well known corporate to make people aware on how their dreams can turn true. One of the sweetest compliments which acknowledged his commitment came from a client who said “You are a family that looks after our family”

It is said that money follows the trail of growth and those who align themselves to that trail meet their financial goals. Directional Investing follows that learning and Abhishek empowers his clients with his deep understanding of Asset Allocation which helps him to provide his clients with a systematic wealth creation process irrespective of any phase of economy. Living your dream is a blessing and making dreams of others come true is a motivation that drives him and his company. He has also in his journey inspired many. He shared his story in MFRT Regional Conclave, Kolkata. MFRT (Mutual Fund Round Table) is one of the biggest conferences in India. There he inspired youngsters to join his noble profession. ,

His most special memory is being awarded for his contribution to the mutual fund industry by his hero, the former Indian Captain Kapil Dev, in an event organized by Nippon India Asset Management Company.

He loves adventure sports and travelling, and makes sure that he travels to a new destination with this family every year. His 7 years old son has also made few videos on financial awareness, Abhishek hopes he also joins the league very soon.