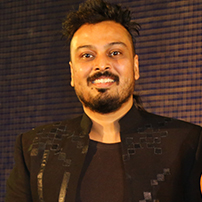 Abhishek Dutta is already a glittering star on Kolkata’s fashion firmament. A science graduate, who received his fashion technology degree from Wigan& Leigh College, Kolkata, Abhishek has already earned accolades galore. After receiving the most creative design award at his graduation show Entr’acte99 Abhishek went on to bagged the award at the Smirnoff International Fashion Awards (SIFA) in 1999. He designed clothes for the Femina Miss India 2001. He was launched internationally when he was invited as the only Indian designer to showcase at Bali fashion week in 2005 followed by Asia fashion week in 2006 and 2007 respectivly.This designer had more treasures stored away in his cache an soon a collection was showcase internationally in Jakarta (Indonesia), Malyasia, London ,Singapore,Bangladesh, Muscat and Dubai. He has also been selected to showcase at Tranoi Paris. He has been also a part of the Wills India Fashion Week and Lakme India Fashion Week for last 8 years he has also been an intrensive part of Bangalore Fashion Week,Hyderabad Fashion Week and Kolkata Fashion Week for last few seasons. He also showcased at first world tour of bfw at Bangkok in 2013. He has got his credibility in dressing up some of the stars like Irfan Khan, Raima Sen, Riya Sen, Konkona Sen, Neha Dhupia, GieseleMontrio, Jacequiline, YamiGautam,Sonal Chauhan,Rituparna Sen Gupta, Soha Ali Khan,etc in Bollywood feternity who has been his loyal admirers of his work and working with some of the best directors like Aparnasen and Rituporno Ghosh. He also has beenhonoredby the Bharat Nirman Award in 2013 for his outstanding contribution in field of fashion.

Today Abhishek retails from twenty stores across the country including the country’s leading designer stores such as Kimaya, Samsara, Aza (both Delhi and Mumbai) Amara, Oorja&Elahe , Anonymns, Praana (Hyderabad),Mogra ,Ffolio& Bliss (Banglore), Nilibar (Ludhiana) Aura(Nagpur),Aura (Raipur),Aura (Surat), Personna( Hyderabad), Nautanky & Saga(Ahmedabad). His creations is also available internationally in Singapore, Dubai, Kuwait ,Riyadh, Malyasia, London and New York.
Abhishek’s distinctive style is the fusion of ancient embroidery with futuristic cuts and uses thus a saree could have a mingling of kashap crochet and leather. He loves working with handloom and natural fabrics and experiments with asymmetrical cuts. The label personifies an unmistakable combination of bohemian freedom with subtle sensitivity. There is originality and a lot of creativity, which is portrayed in his garments; Abhishek Dutta’s style is avant-guard at times making him a step ahead of the others. Class, style and the allure of mystery is what the designer label has, to offer.
The label boasts a large diversity ranging from Indian, Western and Bridal for both men and women; providing its customer a variety of choice and alternatives, matching the taste of all.The prêt line retailing under “Ad normal” label and diffusion and couture under “Abhishek Dutta”. He has recently launched his furnishing line in collaboration with Portico-. New York that includes bedsheet, cushion covers, duvet covers etc. He has also joined hands with P C Chandra jewelers to launch his first signature line of jewellery.