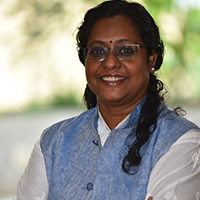 Dr Abha Rishi, CEO, Atal Incubation Centre-BIMTECH and Chairperson for the Centre for Innovation and Entrepreneurship Development (CIED) at Birla Institute of Management Technology, has 25 years of experience- in industry and academics. She is a PhD, an EEC Honors from STVP, Stanford University, PGDIBO, MFT and MIB. She is one of the few Indians to hold both Fulbright ( USA) and Chevening( UK) scholarships. An avid reader and traveller, she has traveled extensively across 19 countries in the 5 continents, as part of her work and research. She has received various awards and accolades like the Accenture I&D ( Inclusiveness & Diversity) Award on March 8, 2017, for her work with the underprivileged sections of society. This award was given to only 5 other people from across the country. She has recently been awarded as the winner in the academic category by the Sandvik India Gender Awards in August 2019.
She has been conferred the Entrepreneurship Education Champion’s Award from the Ministry of Skill Development and Entrepreneurship (MSDE), along with NEN, EDII, the British Council and Intel in 2015. Dr Abha Rishi was also conferred the ‘NEN Entrepreneurship Educator of the Decade’ award in February 2018. She was felicitated for her contribution in developing ecosystem for entrepreneurs by DIPP, Government of India, in March, 2019.
https://www.linkedin.com/in/abharishi