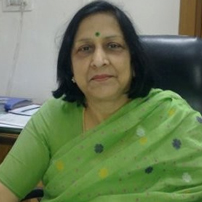 Mrs. Abha Bahadur is Founder President of a not- for- profit, non- governmental organization, Centre for Water, Sanitation and Health for Women, which was empanelled as a Key Resource Centre under Swachh Bharat Mission (Gramin) with Ministry of Drinking Water and Sanitation, Govt. of India, in July 2017.
Subsequently it has supported Govt. of Uttar Pradesh to verify and evaluate toilets constructed in declared open defecation districts and trained Swachhagrahis in the states of Uttar .Pradesh and Rajasthan to bring about behavior change in the community towards use of toilets and ensure sustainable open- defecation free villages.
Mrs Bahadur was earlier Senior Vice-President of Sulabh International Social Service Organization, a well-known non-government organisation in the sanitation sector in India where she worked for over two decades in various capacities towards human rights of scavengers in India, majority of whom were women. She has also helped towards improved access to sanitation facilities through advocacy of sustainable sanitation technologies in conferences in many countries worldwide.
Mrs. Bahadur represented Sulabh at the United Nations for many years and participated in its meetings in New York, Geneva and Lisbon.
She was also Chairperson of Sulabh Public School, New Delhi, in which quality English medium education was imparted to children from marginalised and down-trodden communities.
Mrs. Abha Bahadur is the recipient of “2002 World Human Rights Promotion Award” by All India Institute of Human Rights.