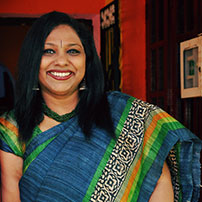 A proud single mom, Aarthi is a career driven, hard working individual who is forthright in her convictions and enjoys the gift of the gab. Her ability to negotiate and influence are key strengths that have helped her achieve significant career targets over the last 20 years.
Passionate about children and their rights, Aarthi makes herself available to advocate for them, speak on their behalf and works with children on a therapeutic level, believing in making a difference.
In 2009, she chose to follow her heart and spearheaded Enchanting Elves, a holistic school for tiny tots, a place where children can be children and where they can learn, play and share in a loving, caring, protective environment. She was the Head of Enchanting Elves until 2017.
Aarthi, now, has chosen to use her skills to help people navigate through the toughest part of their lives as a Coach and Counselor. She is the founder and chief mentor of Youvolve, a coaching, counseling and consulting company that helps both individuals and corporate unlock their potential, with powerful questions to help carve out their best version of themselves.
She currently consults with companies that wish to empower their leaders with a specially crafted Leadership program.
Educational Qualifications
A Psychologist, qualified Coach and Master practitioner of NLP, Aarthi has an impressive academic record that completes the entire package:
M.Phil (Psychology) in distinction from WCC, Chennai;
M.Sc. Psychology from the University of Madras;
Business English Communication (BEC) – Level 3, from the University of Cambridge;
A double Masters in HR, Personnel management and Industrial Relations

Working alongside the Government of Tamil Nadu, Aarthi in capacity as a Psychologist and Secretary of TNECCD – Tamil Nadu Early Childhood Care and Development, developed the rules and regulations for the Early Childhood segment.
She was with the YLC – Young Learner’s Centre at The British Council in Chennai, training children between 5 and 16 in many topics such as drama and debate, and has conducted the Reading Challenge, a popular educational program in schools in the UK to promote reading amongst children.
She has presided over several competitions at prestigious schools and colleges as the guest of honour and has been invited as Chief Guest and speaker at several conferences, clubs, schools, colleges and guest lectures.
Media:
Aarthi has been featured in India Today (Tamil), interviewed live on Jaya TV, a leading television channel, and was featured in a regular television segment discussing values and child related issues in a popular Tamil television channel for a period of a year.
Awards:
• Awarded the Bharat Vibhuti For Excellence in Education Systems and Practices in New Delhi by GOA in 2016.
• Awarded the Rashtra Vibhushan for Excellence in Education by FACE, New Delhi in 2015.
• Aarthi’s brain child, Enchanting Elves, has received the honour of being chosen as one of the Top 20 schools of Chennai by Education World (2012-2013).