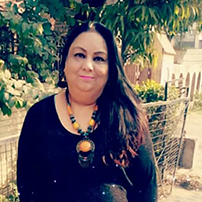 Aabha Vatsa is a Poet, Author, Writer an ex Blogger, an ex teacher and President of Asian Literary Society, an online group, an Environment Crusader and is based in Faridabad, near New Delhi.She was born in her maternal home Phagwara in Punjab and, grew up in Bamrauli , Allahabad in CATC (Civil Aviation Training Centre) in a cosmopolitan environment in the self sufficient colony where her father was posted. She studied in the famous St Mary’s school and later in Kendriya Vidyalaya Manauri , Allahabad. At the age of 12, she travelled to Zambia as her father was deputed in Mongu, and went on to complete her schooling, passing out from Senior Cambridge.She joined Punjab Univerdity to pursue her Masters in Chemistry. A few years later she did her B.ed from Annamalai University. She taught in reputed schools of Delhi and Faridabad and later gave up teaching to raise her daughters.
In 2010, she started a blog called DAFFODILS , and thus began her journey as a writer. In 2012, she became a Lord Shiva devotee and had a desire to go on a piligrimage to Amarnath cave in Jammu and Kashmir. She chronicled her piligrimage with her first published book, a Travelogue, titled’ Barfani Baba, To Amarnath Happily, ‘ in 2013.
In 2014, when her mother was unconcious on her death bed in ICU, she poured her anguish by posting a poem.’Roothi Ma’. This poem was noticed by a poetry group and they invited her to join the group. She joined, and thus began her journey as a poet and writer.
In 2015, she established herself as a poet by publishing six poetry books
Harmony
Home Alone
Miracle
Desire
Mannequin
Euphoria.
In 2017, she published two more poetry books Dance and Compassion and her first work of fiction, a collection of short stories titled, MONSOON MUSINGS. Besides this, she has contributed in several national and International anthologies, some of which are :
Symphony of Peace Sensible Sensualities Enerald Hues Mother I Am a Woman, tribute to Kamla Das She the Shakti Kaafiyana
Spring, the season of love Poetic Rainbow and a few more upcoining ones.Her poems have also been published in various national and international journals/ezines. She hosted the Faridabad chapter of the Global Poetry event, 100 000 Poets for Change in 2017.
She participated in the International poetry event , hosted by the PENTASI B group, held in Hyderabad in October 2017.
As President of ‘ Asian Literary Society’, she regularly conducts and judges poetry contests, thereby contributing to the world of poetry, and the winning poems will be compiled as anthologies in paperback. She has been bestowed with several awards for her writings. Awarded MARGDARSHAN award, 2013, for social activist and blogging by KRDWG. Awarded INSPIRING GEMS OF INDIA, Queen by Dr Shivangi Maletia who is a well known Women Empowerment Coach. Awarded with a certificate and traditionaly awarded with a stole by the AAGMAN group on the ocassion of International Women’ s day in 2017. ENCHANTING MUSE award by Writer’s corner, Warangal, in 2017 in Hyderabad.
FELLOWSHIP certificate . Awarded as FELLOW of the Regal World of Scribes. Awarded GLOBAL PARTNER FOR PEACE AND SUSTAINABILITY award by 100 000 Poets for CHANGE in 2017. Awarded International DIPLOMA TEMIRQAZYQ – The best Poet writer of the world , 2017, in honor of the 26th Anniversary of Independance of Kazakhstan. As member of the NGO , FAG (Faridabad Action Group) she helped organize and conduct a GREEN FEST in Faridabad in 2017 to help create awareness of adopting an eco friendly lifestyle in order to conserve a Green Earth.During this Green Fest she provided eco friendly cotton grocery bags to help curb the polythene menace. The fest will be held in various venues of Faridabad to spread the message of GREEN EARTH. She has become an environment crusader and is determined to contribute to make the Earth a green, beautiful and healthy planet for the children. She is spiritually inclined, and a quintessential student of life. She is a die hard optimist and believes in the power of the written word. Her life mantra is, Karma. She is also a proud mother of two young professional women.****************************************************************