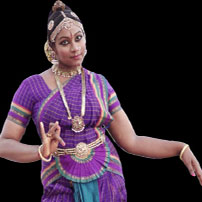 Nrithya is presently the Director of Rajarathnalaya Bharatha Kalai Koodam, the school initiated by her maternal grandfather, Kalaimamani Swamimalai S.K. Rajarathnam Pillai. She received the Bharat Kalachar Scholarship during her tenure at Padma Seshadri Bala Bhavan. A graded artist of the Chennai Doordarshan, she was recommended for an upgradation by the judges when she auditioned for the B-Grade. As a young guru, she has many arangetrams to her credit and has been widely appreciated for her sincere and untiring teaching capability. She has performed widely in the Sabha circles for the Margazhi festivals, Natyanjali festivals and several other festivals. She received the “Natya Ratna” award from Trinity Fine Arts in 2015. She was adjudged as one of the best the performers in the Vasant Utsav,2012 and Parthasarathy Swami Sabha,112 dance festival.