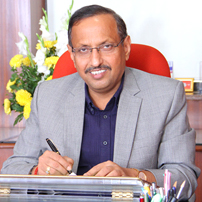 Shri I. S. Jha (57 years), (DIN: 00015615) is Chairman & Managing Director of our Company. Prior to his present assignment, he successfully served as Director (Projects) of the Company from September, 2009 and was responsible for planning, engineering, project management, monitoring and implementation of all transmission and distribution projects. An Electrical Engineer from NIT, Jamshedpur, he is a well known Power System Professional having more than 35 years of rich and varied work experience. He began his professional career in 1981 as an Executive Trainee in NTPC. He has been associated with POWERGRID since its inception in 1991 and has been part of departments such as Engineering, Distribution Management System (DMS), and Corporate Monitoring Group. He has worked as Executive Director of North Eastern Region, Engineering and Corporate Monitoring Group of the Company. While working at various projects and Corporate Ofice of NTPC and POWERGRID, he was involved in conceptualization, planning, design, engineering, monitoring and implementation of projects of National importance.
Apart from these, he has been a lead Member in Planning, Engineering and Execution of APDRP and RGGVY schemes in POWERGRID. He is member of Governing Body of CPRI, Bangalore and Empowered Committee of Government of India for promoting competition in Power Transmission Sector. He is also associated with professional bodies such as Institution of Engineers – India, Power Engineering Society of IEEE – USA, and International Council on Large Electric Systems (CIGRE) – France. He has published/ presented numerous articles, technical papers in the ield of power system in various international and National Journal/Conferences. He has been appointed CMD of the company in November, 2015.