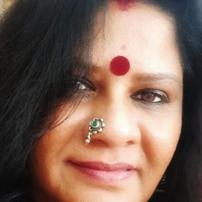 Beena Unnikrishnan is an artist, entrepreneur and a movie maker who, inspired by the call of the mystic traditions, is in a continuous quest at giving manifestation to the hues of the ethereal energy that brings balance to this world through Purusha and Prakriti.
Prominent works from her elaborate portfolio as an artist include the series of the ‘Chausat (64) Yoginis’ depicting the aura of Shakthi with her demi-goddesses in all her manifestations. As a sequel to this she is also in the process of writing a book on “Unleashing the Power of the Feminine Within”. The Nakshatra series, which is a set of 30 paintings, is yet another example of her experiments at amalgamating Tantra with art which encapsulate the correlation that exists between the journey of the moon and that of the soul; a visual representation of the ancient Indian science of astrology or Jyotishya.
Film making was yet another journey that she embarked upon as a part of her inklings towards creativity and exploring a medium that can manifest an idea in a lifelike manner. As the CEO of Iris Green Films, she produced “Maiyaa”, a film that addresses the loneliness of the elders or the aged. She has also made two short films, “Home is Where the Heart is” and “Antaraal”, for All Ladies League (ALL), India Cinema Chapter. Through her films she endeavours to address social issues that were always the core identities to our culture but are being overlooked as we progress towards development.
Through her research fellowship on “Application of Cognitive Dynamics through Art in Alzheimer’s and Dementia Patients”, she explored and studied the power of art in stimulating all the five senses. She has, since then, endeavoured at utilising images and colours that have psychological and behavioural effects on the observer. For her work in this field she was awarded the Senior Fellowship Award from the Ministry of Culture, Government of India.
She is, at present, the National President, Arts Leadership Council at Women’s Indian Chamber of Commerce and Industry (WICCI); India’s First National Business Chamber for Women and the India Chapter Chairperson for Cinema at All Ladies League (ALL).